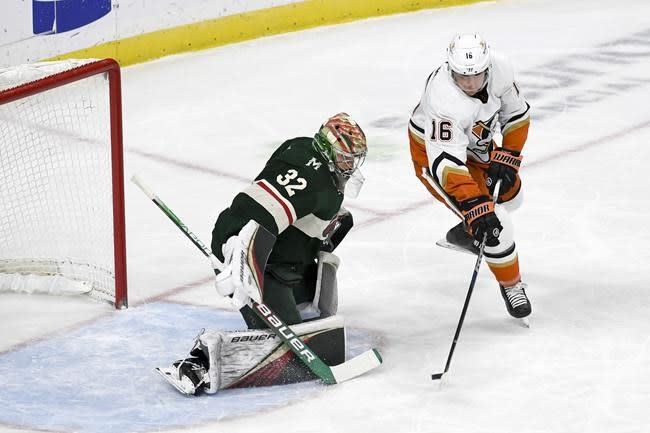 The Anaheim Ducks continued their road trip in Minnesota against the Wild. John Gibson was in net against Filip Gustavsson.

The Ducks created a few turnovers early in the game, but did not score on the offensive opportunities.

The Wild would score first in this one. Calen Addison took a point shot, which was going wide, but the puck hit Max Jones and redirected into the back of the Anaheim net.

The Ducks would answer back with a goal from Ryan Strome. Frank Vatrano took a point shot and Strome redirected it in front of the net for the score.

The Wild would then reclaim the lead. Gibson made the initial save, but the puck was next to his right leg uncovered. Connor Dewar rushed in and tapped it in the back of the next. Some of the Ducks thought the whistle should have been blown, but the goal counted.

The Ducks would get a power play halfway into the second as Mason McTavish got tripped up. Cam Fowler would score with a point shot on the man advantage to tie things up at two.

Anaheim would take the lead with one minute to go in the second period. Dmitry Kulikov took a point shot, which was blocked, but the puck laid in the crease. Trevor Zegras got to the loose puck for the easy tap in goal.

The Wild would tie the game on a power play early in the third period as Brett Leason was called for holding. Joel Eriksson Ek would get to a rebound and score five hole to even things up.

Tempers would flare at the Ducks net a few minutes later. John Gibson and Jordan Greenway got tangled up in the crease. Both received two minutes for roughing.

Ducks get a power play as Minnesota was called for too many men on the ice. Mason McTavish took a shot from the right face-off circle and Troy Terry got to the rebound punching it in for the score.

The Ducks held a 4-3 lead, but the Wild would tie it up with about two and half minutes to go. Mats Zuccarello would find Kirill Kaprizov open in the slot and he beat Gibson glove side to tie the game. The teams remained tied at four by the end of regulation.

Terry had a breakway early in the extra session, but the puck was knocked away before he could get a shot off.

The Ducks were awarded a power play with just over a minute to go when Kaprizov was called for hooking. Anaheim didn’t convert and a shootout would be needed to determine a winner.

The Ducks shot first in the shootout. Trevor Zegras went first for Anaheim and scored after making a series of small moves to fake Gustavsson out. Kaprizov was up next and he scored for the Wild. Matt Boldy would also score to give Minnesota the win.

The Ducks played well enough to earn a regulation win, but ended up coming up short in this one. Puck luck was against them early on in this one. The Wild’s first goal went off Jones, but it was heading wide of the net. The second goal by Minnesota was tapped in under Gibson after he appeared to cover it. The puck was right next to his leg and the ref lost sight of the puck, but didn’t blow the whistle so the goal stood.

Anaheim has started to figure things out on the power play converting five of their last 10 power plays. They went two for three in this contest with goals by Fowler and Terry. The adjustments of having Zegras on the left flank and Fowler taking the point shots have been working recently. McTavish getting time one the first unit has been working as he has six power play points now(2 G + 4 A).

Despite having no puck luck and being outshot badly in the second half of the game, the Ducks were just minutes away from earning a regulation win. They also had a chance to win in overtime with an abbreviated power play. In the end they lost in a shootout, but this was a better performance than the one in Dallas.

Isac Lundestrom fractured his finger and is out for six weeks.

Derek Grant suffered a lower-body injury and did not return in this game. He is listed as day-to-day.

The Ducks are back at it tomorrow at noon in Winnipeg.

Support us by becoming a DucksNPucks patron! Members can win game tickets, Ducks gear, and more!

Want to start your sports media career? Then Join The Puck Network!

DucksNPucks is part of The Puck Network, which covers the entire NHL. There are openings to cover your favorite team(s) and earn school credits! If you are interested, then apply by filling out the form here: Join Our Team. What are you waiting for? Start your sports media career TODAY!